Design and development of the CB400F model commenced in 1973 as a refinement of the CB350 with the aim of achieving better overall performance and creating a distinctive style for the smaller fours. The engine’s capacity was increased by enlarging the 350′s bore, a six-speed gearbox was used and a handsome chromed 4-into-1 exhaust system gave the 400 a striking and original look. The CB400F was an instant hit. It was a masterpiece of subtle styling that drew many enthusiastic riders to Honda when revealed in 1975. Leading a trend towards uncluttered European-style ‘cafe racer’ machines, the CB400F had the lean looks of a competition bike. For the first time on a Honda Four, low-set handlebars and rearset footrests were standard. Attractive and simple primary colour schemes were offered, with decals replacing badges on the tank. Despite its modest capacity, the sheer riding pleasure the four offered made it much a loved model very soon thereafter to be ranked as a classic. 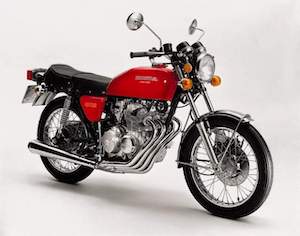 The F0 was offered in 1975 and 1976 and featured a solid color tank and side-panels in Light Ruby Red or Varnish Blue. The tank logo featured a large “Honda” with a smaller “Super Sport” logo underneath. The side-cover logo read “400 Four” in a distint double-line font. In 1976, after frame number 1056883, the passenger footpegs were moved from a swing-arm mount to a loop bracket welded to the frame. 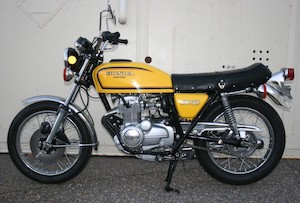 The F1 model was offered in 1977 in the US and Canada markets with Light Ruby Red or Parakeet Yellow tank paint options with black side covers. The most significant changes from the F0 are higher handlebars and front foot rests which were moved further forward for a more comfortable riding position. 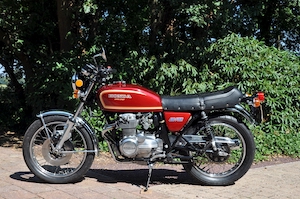 The F2 model started with frame number 1073400 and was offered in two new colors, candy antares red or parakeet yellow with a silver “Honda” logo. A stripe was added to the tank and the the sidecover logo font was changed from the previous model. In the US market, the side covers were black like the F1 model. The tank was restyled with a slightly recessed locking filler cap. The raised handlebars were brought foward from the F1 in all markets. After engine number 1084315, longer cylinder head studs were used to attempt to fix issues with oil weeping from the head gasket.